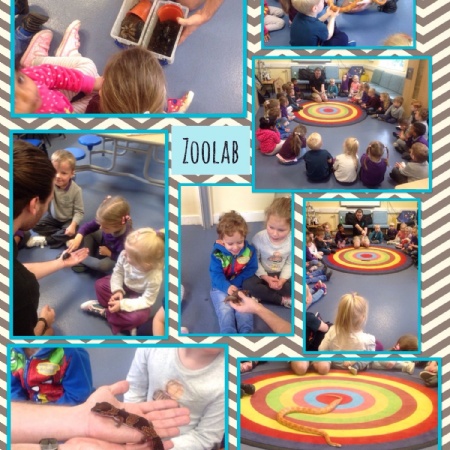 Last week we had a visit from Zoolab!

Barry from Zoolab came to nursery to show us his selection of animals. Barry made sure everybody knew that it was important to wash their hands when they finished touching the animals. Then Barry asked everybody to feel their spines so we could feel our bones, then he told us that none of the minibeasts have any bones in their bodies.
First we met Deidre the Giant African Land Snail, we had a chance to stroke her shell, it was very smooth! Barry sprayed Deidre with water first to keep her nice and slimy, the slime is used in some moisturisers so it was very good for our hands!
Next we met Kevin the Madagascan Hissing Cockroach! Kevin has six legs, he has no bones but has a hard outer case to protect him. When the cockroach feels threatened, it hisses like a snake to scare off predators! Lots of the children stroked Kevin, and some brave people even held him!
The next creatures we met were Tracy the Tarantula and Steve the Scorpian! We had a good look at these animals but they stayed inside their special boxes because they don't like big open spaces! We had a peek at them but didn't touch as they might be dangerous because of their fangs and pincers!
Then we met Michelle the Giant Millipede! We learned that millipedes are like natural cleaners because they crawl around the floor and eat the rotting leaves! Michelle had lots and lots of legs! When she crawled on our hands, she felt like a 'walking toothbrush'! She even went for a wander around the carpet!
Next we saw Gary the Gecko! Gary had a big tail because he keeps his food in it like a lunch box! We had the chance to stroke Gary but we had to be very gentle because he was only little! Gary the gecko felt bumpy on his skin and was covered in spots! We learned that Gary wasn't a minibeast but he does eat them!
The last animal wasn't a minibeast either....she was a reptile with no legs! It was Sophie the Corn Snake! Sophie was poking her tongue out lots, she uses her tongue to sense what's going on around her. Sophie wasn't slimy at all, lots of us were brave and held her, she was very heavy and strong! She went for a slither across the carpet too...she was quite fast!
What a brilliant time we've had meeting all of the animals! Thank you Barry! 😃🕷🦂🐍