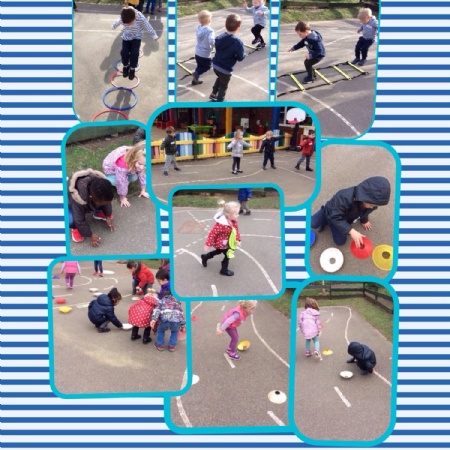 This term we have been taking part in One Touch Football sessions every week.

Every Friday the children have been going outside in small groups and taking part in the physical sessions. They have been practicing their gross motor skills, running and avoiding obstacles, jumping over hurdles, around cones, through ladders!

This week the children have recapped on what they learnt last week and improved their skills. They have played the Bean Game, where they have to perform actions like a 'runner bean, baked bean, jelly bean, French bean and tall bean'!

Next they were pretending to be different animals, listening to instructions and moving in different ways. For example; giraffe - stand on your tip toes with one arm in the air and follow the other giraffes.

After that, the children played foxes and rabbits. They were given bibs to put in their pockets, the foxes had to chase the rabbits and get the bib from out of the rabbit's pocket. It was so much fun!

They have really enjoyed the sessions and it has been beneficial to their physical development. 😃👍⚽️