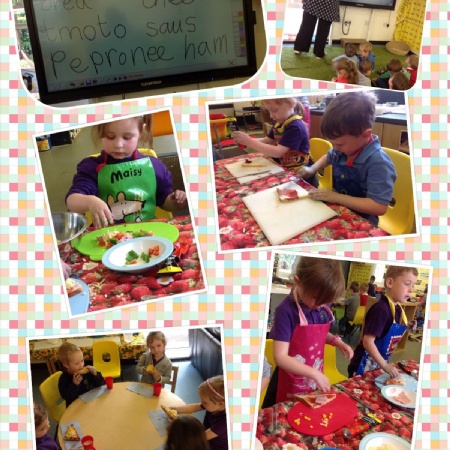 Children in Yellow Class have been using their phonological awareness this week to help them write a shopping list.

They wanted to make pizzas but we needed to go shopping first! The whole class chose which toppings they would like on their pizza and then they helped Lucy spell the words on her shopping list. They worked together and thought hard about which sounds they could hear in each word to help them sound it out. Some words were easy, like 'ham' but some were a bit tricky, like 'pineapple'! After the class had made the long list altogether, they split into smaller groups to have a go at writing their own shopping lists!

Later in the week, Lucy had found all of the things on the list and the children made their own pizzas! They used knives to spread the tomato purée onto the base, grated and sprinkled the cheese on and then added the toppings they had chosen earlier. When they were cooked, all of the children took their pizzas to the snack table to eat! "Is it tasty?" asked one of the grown ups..."it's yummy yummy in my belly button!!!" replied one of the children!