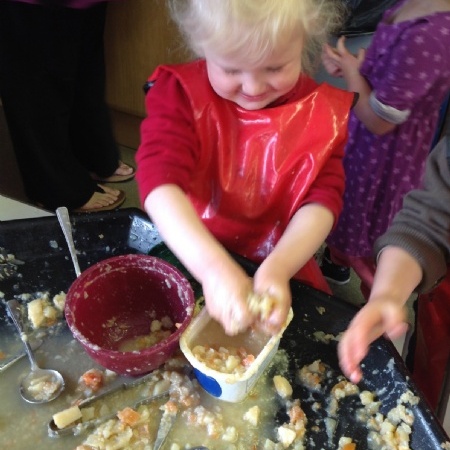 The children in the Yellow Class investigated different vegetables when they had a go at making soup.

The children in the Yellow Class have made soup this week. They were encouraged to feel all of the different vegetables before they chopped them up, and describe what they were like. After they tried to 'squeeze' the vegetables, they discovered that the carrots, potatoes and parsnips all felt "hard".

They cooked the vegetable soup and left it to cool overnight, but instead of eating it....they played with it! The children noticed how the vegetables had changed after they had been cooked.

They scooped the soup into tubs, used tongs to pick up the lumps of vegetables, and mixed it with spoons until it had turned into mush! Then they added slices of bread and some crackers to the soup to see what would happen! The bread was "sucking the water up!" and the crackers went "soggy"!